I performed a series of hard cider exercises in early 2014 which turned out... just ok. Some of these ciders turned out to be decent, but for the most part the various small batches I made didn't taste good due to bad brewing practices / new brewer mistakes. Most of the problem was too high a brewing temperature, so the examples that ended best were wild or sour yeast blends and cultures that would have had some funky flavors anyway. 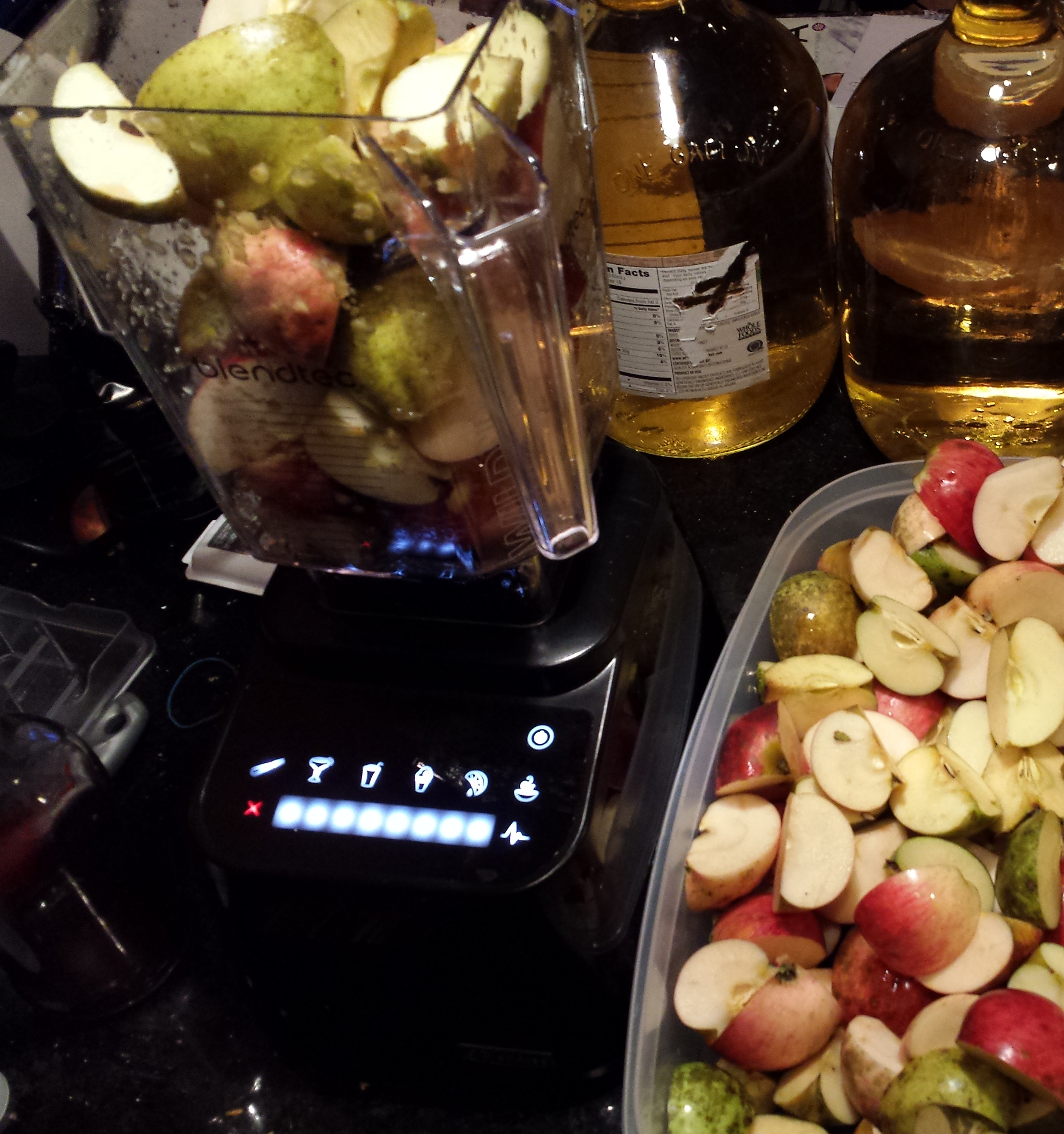 I started by picking about 50 lbs of good apples from the random trees out at the Evenhouse farm. Most of them were relatively sweet, but some of the types of apples were extremely tart and high in acid content, which I knew could be delicious as cider. Once I got the apples home I rinsed and quartered them and threw away the rotten and wormy ones. Then I tossed the apples into the blender and ran it until I had some juicy apple pulp. 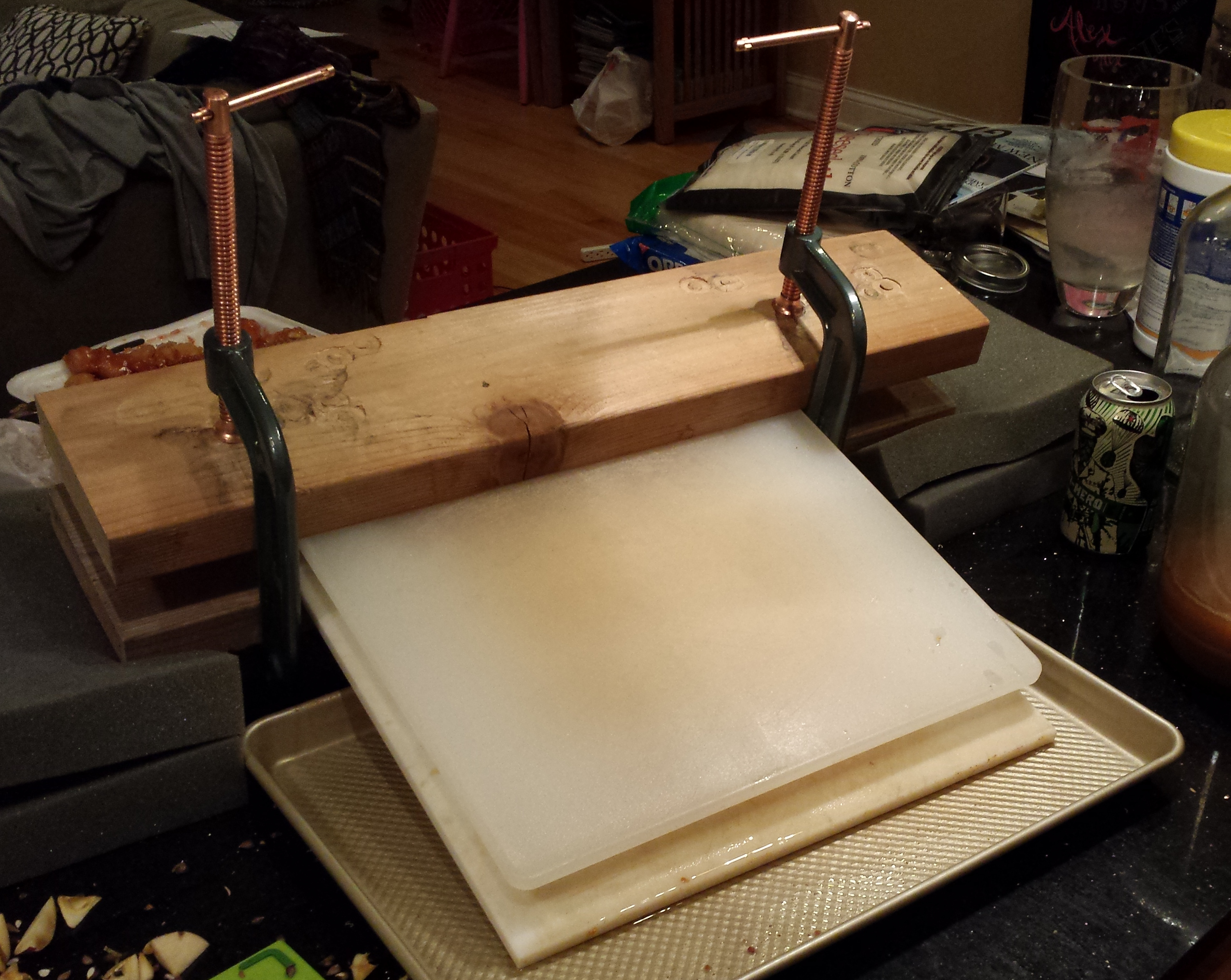 From there the nice juicy apple pulp got wrapped in a few layers of cheesecloth, and put between two cutting boards. I used c-clamps and a couple of 2"x4"s to clamp down around the apples, and by tightening all the c-clamps slowly pressed the juice out of all 50 lbs of apples. The entire process was incredibly time consuming, so next time I do this I'll be using the hydraulic press at the farm instead of c-clamps and 2"x4"s.

The entire process yielded around five gallons of cider, which I split into six 1 gallon jugs for fermenting. I used three different types of yeast across the fermentors: EC1118 champaigne yeast, Red Star Montrachet dry wine yeast, and a Lambic blend smack pack I had been keeping in the refrigerator for far too long. I pitched the dry yeast packets directly into the jugs, and the Lambic blend was its own starter so it was ready to go.

Once the yeast appeared to be active in each of the fermentors I wrapped each glass jug in a towel and set it in a container with water in the bottom. By using the evaporative cooling effect I was able to keep the temperatures of the cider around 65 deg F for the entire visibly active portion of the fermentation. 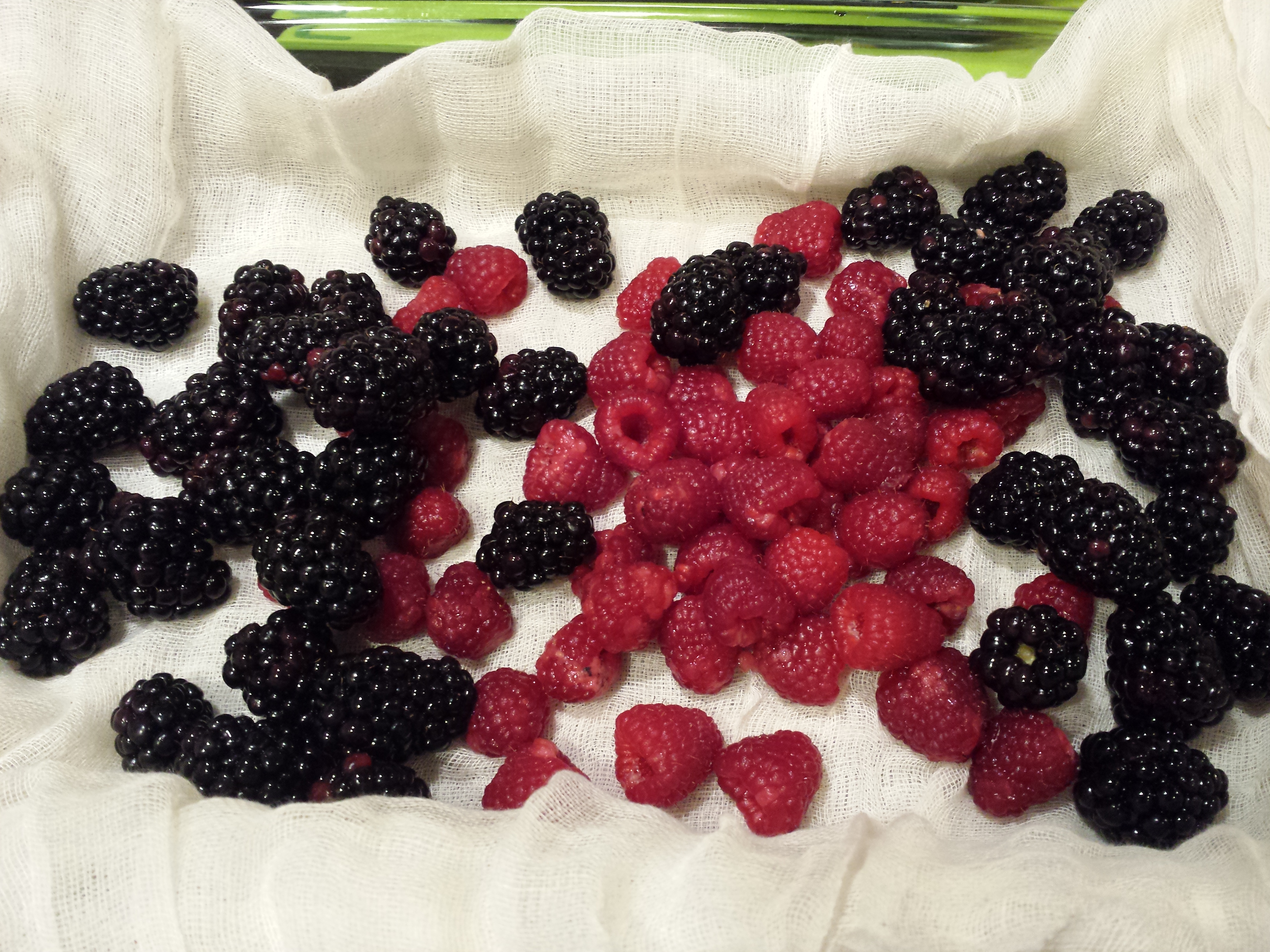 I didn't want to just let all six batches of cider ferment out and end up nearly the same, so I decided to throw some fruit into the mix after all the ciders were through with primary fermentation. Unfortunately my market was almost entirely out of raspberries, so I picked up the last 6oz package of raspberries remaining, and another 24oz of blackberries so I could try and get some of that nice berry flavor into some of the cider. I opted for this raspberry/blackberry mixture in one of the Montrachet yeast fermentors, and mangoes into one of the champagne yeast carboys.

Not wanting to deal with a ton of fruit solids in the cider, I again wrapped 30oz of berries in several layers of cheesecloth and then squeezed as much juice out of them as I could by hand. The berry juice yield was about 1 pint, filling a pint canning jar nearly to the top with thick opaque juice. I dumped the juice into one of my Montrachet carboys and set it aside to re-ferment at the same target temperature I had used for primary fermentation.

The mangoes underwent their own juicing process, but due to nature of mangoes it took a little more time to get the juice out. I ended up using my masticating-auger style juicer to get about a pint of thick creamy mango juice, which I then mixed with the cider from a champagne yeast batch. Letting the mango cider sit allowed some of the fibrous mango pulp to separate out from the rest of the liquid over night, and I was able to filter this out using more cheesecloth. While I did rinse the berries in vodka, and wash the outsides of the mangoes with soapy water, the fruit and cheesecloth were probably sources of contamination for these two fruited ciders. Only time will tell if something strange took hold. 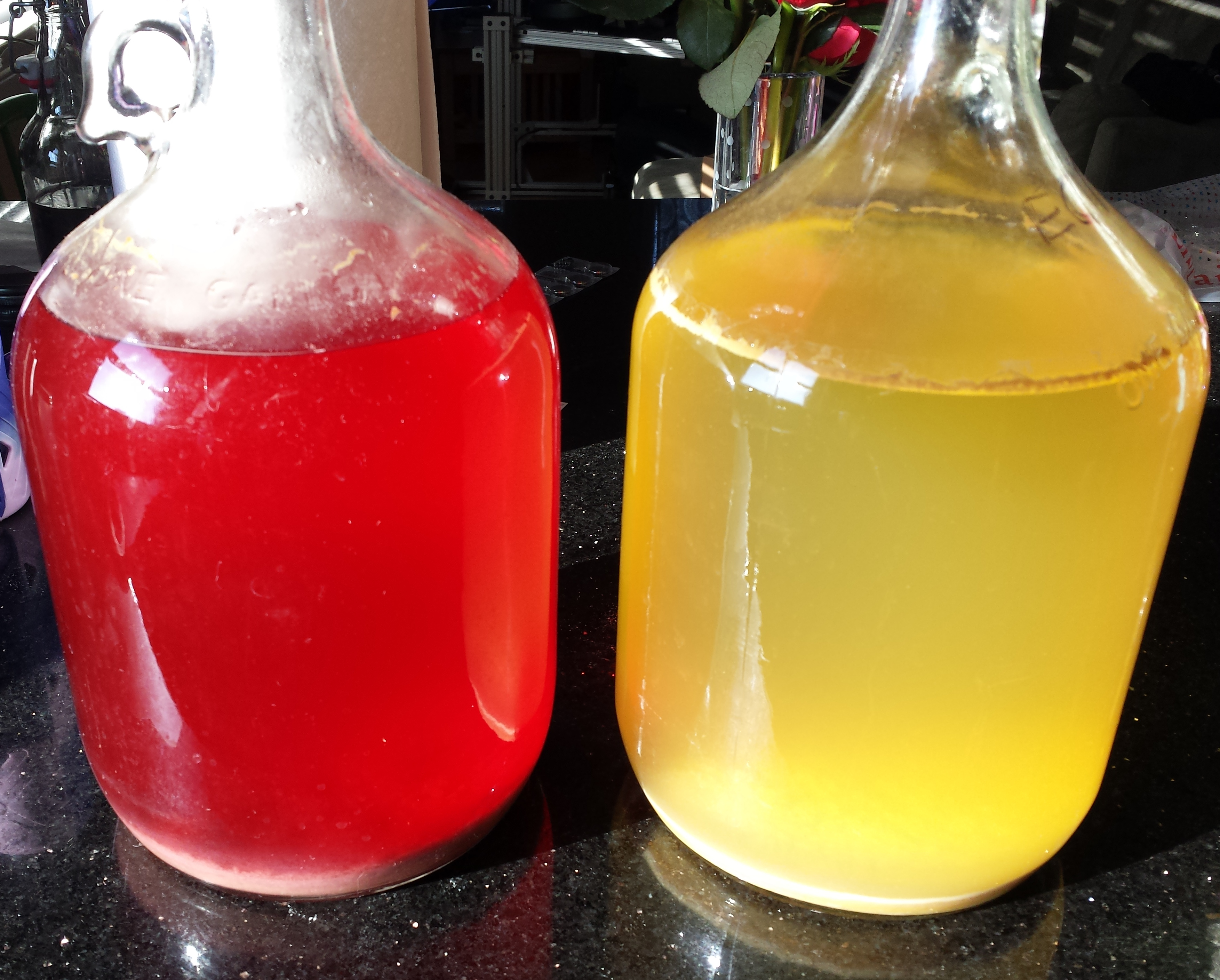 After letting everything ferment until the gravity wasn't dropping any more, it was time to bottle the ciders which were ready. I had intended to let the Lambic blend sit in the carboys for a while longer until it developed a little bit of character, but when I thiefed some it was delicious, so into bottles it went. The uncarbonated berry tasted pretty good too, but the mango was a bit strange. Maybe the mangoes weren't ripe enough, or perhaps they just aren't a great fruit for cider, but there just wasn't the amount of mango sweetness and texture I was hoping for.

Once carbonated I will have produced some blackberry/raspberry cider, mango cider, Lambic cider, and plain old hard cider, all at around 6.5-7% ABV. I'll have a single carboy remaining of the cider already fermented with the champagne yeast, so I'll have to do something interesting with that.