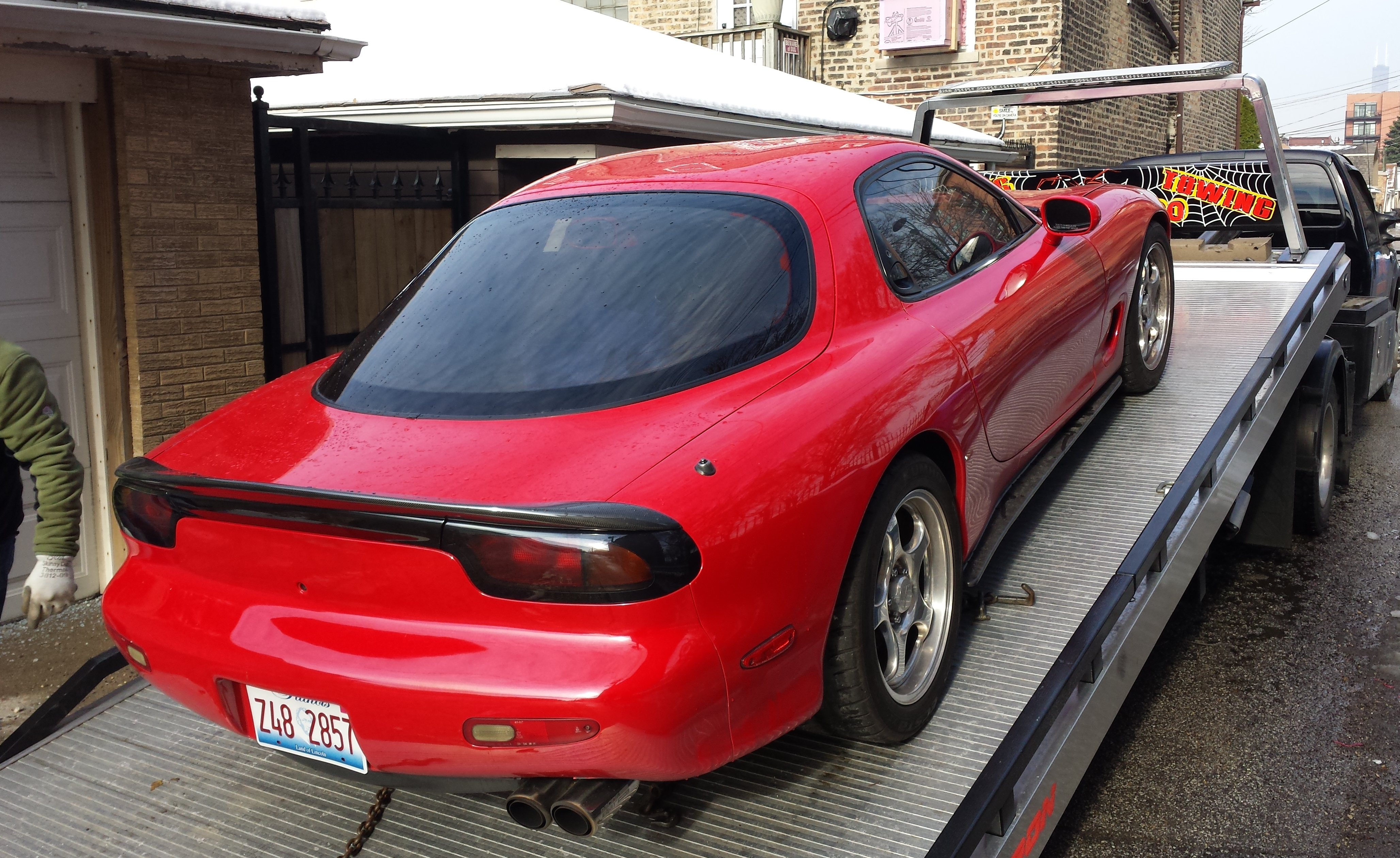 I was unable to get the RX-7 started on my own, so I called a shop for some help and got them to send out a flatbed tow truck to get the car out to them. Since the towing service was the one used by the shop I knew the driver had picked up cars with low ground clearance before. It was nice to know my car wasn't going to be damaged before even getting delivered.

Once I was at the shop I got a chance to talk to the owner and tell him everything I knew about the car, and everything I had tried to get it to start. If it really was just flooded then I would be able to pick it up in running condition pretty soon. 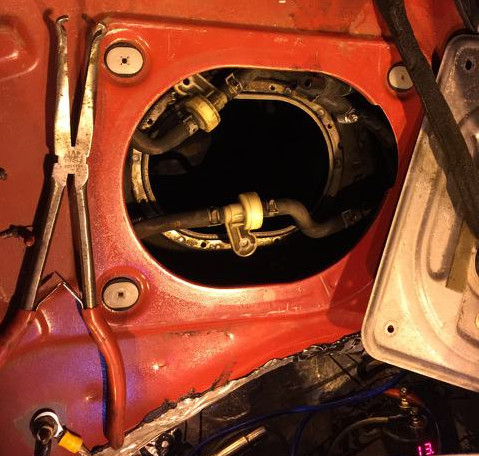 The first piece of bad news I got was that the fuel pump was dead. fuel pressure would build when you turned the car on, but the pump wasn't working well enough for it to provide fuel when cranking, and the pressure would drop. This was unfortunate news, but not the end of the world; testing with a different pump would provide some answers.

When the shop tested with a new pump fuel pressure was strong when trying to run the engine over, but the car still wouldn't start. The next call I got was after they had done a compression test, and the news wasn't good. Compression was down on all faces, below 60 psi, and would likely need a rebuild to get back on the road.

I had some choices to make.
I searched long and hard to find a clean RX-7 without any problems, to avoid a situation exactly like this. I was upset knowing that none of the options I had were very good. 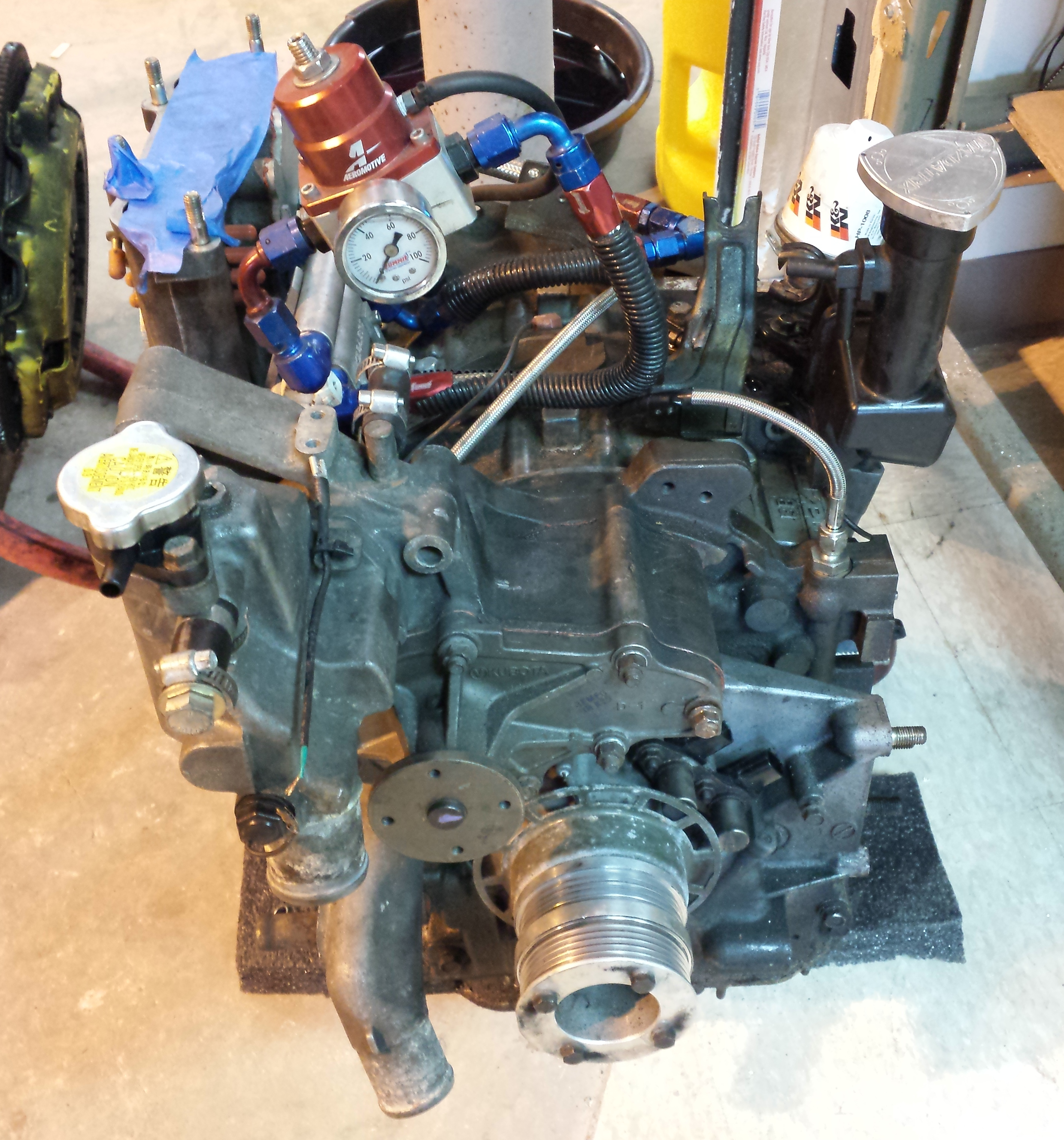 If I tried to sell the car I would take a big hit and lose a lot of money because the car wasn't running. If I chose to do a rebuild I would be spending even more, but then I would have a running car on my hands. Selling the rebuilt car would result in similar loss.

There would be other benefits to doing a build on the car. I would be able to fix any small issues immediately, and I would know exactly what was on the car and what it was capable of. After a night of thought I grudgingly made the call to pull the engine out of the car and go ahead with everything necessary to get the car back on the road again. 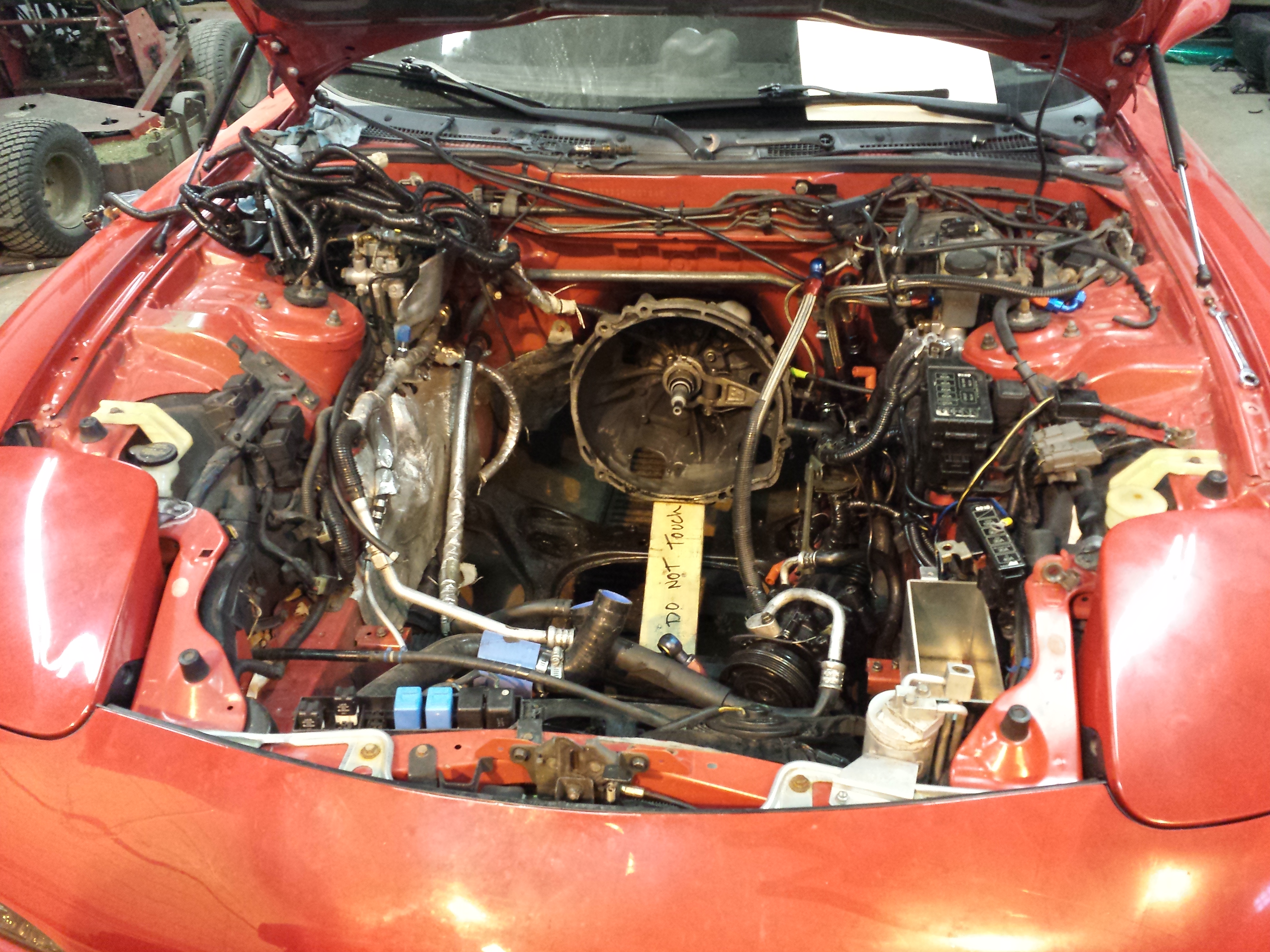 The only issue I knowingly bought the car with was that the gauges were't working correctly, even after the previous owner sent them to be rebuilt and tested. That meant I didn't have a speedometer or tachometer when driving, but I was hopeful that it was just a grounding issue that I would be able to fix quickly. Once the shop had really looked everything over and pulled the engine out of the car it became apparent that there were some other issues.

Aside from the fuel pump itself being dead, there were some other problems in the fuel delivery system. The fuel filter was too small, acting as a potential point of restriction. The AN fittings used to split the fuel lines after the fuel pressure regulator weren't designed for fuel, but instead for NOS. The primary injectors were of an unknown brand, not nice like the Bosch secondary injectors. 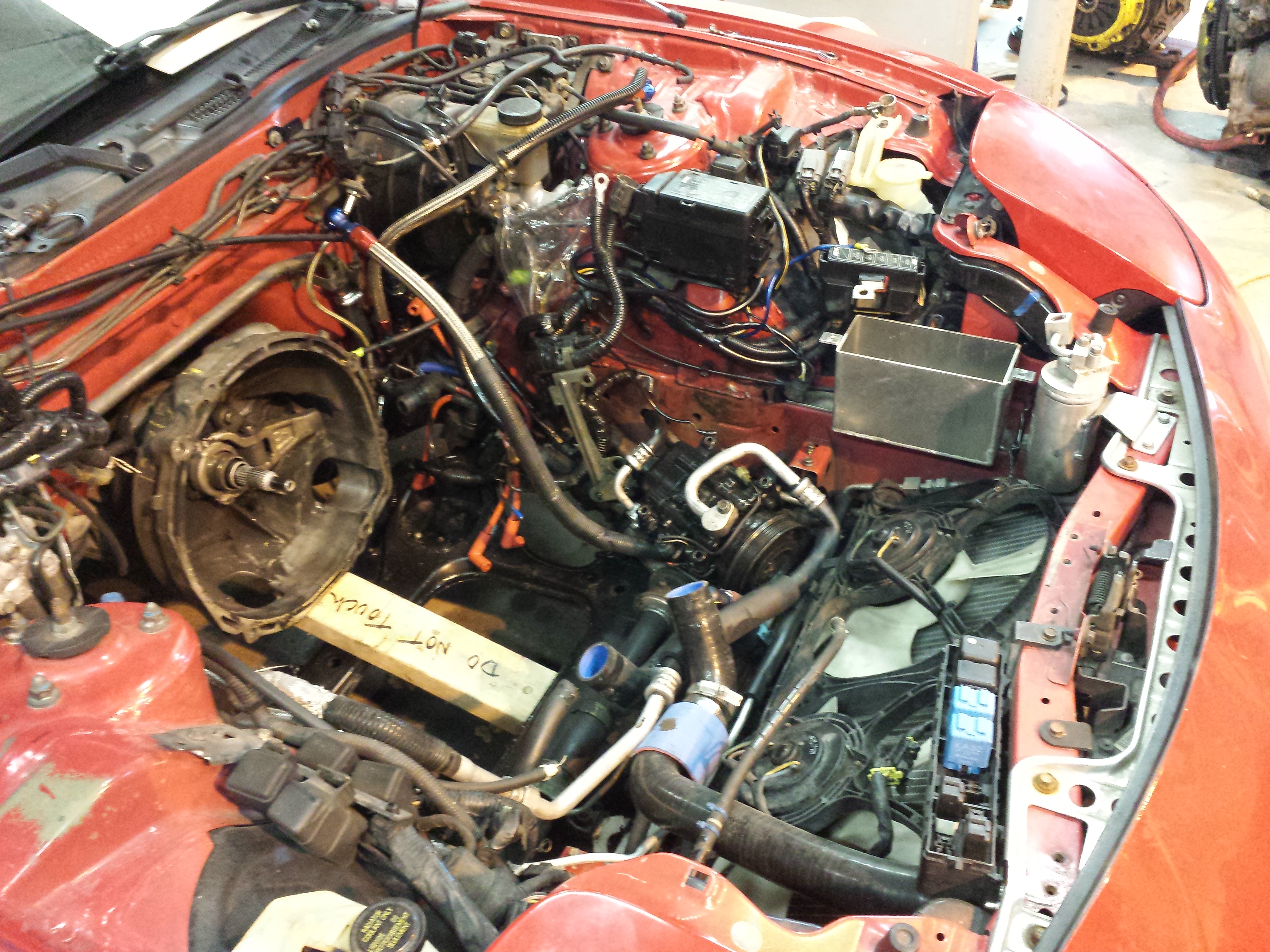 Before I bought the car the transmission was replaced with a presumably lower mileage JDM transmission. On the drive home it felt great, so I didn't think anything was wrong. When The engine came out it appeared the clutch was not assembled correctly. There were bolts partially backed out from the pressure plate, and it wasn't evenly attached. It seemed possible parts were mismatched and I would need to replace either the pressure plate or the clutch disk.

On the engine all of the emissions were blocked off, along with some other things such as the air separator tank. Most of what was blocked off was done with nice pre-cut plates and a gasket, screwed on to the original location, but there were some other blocked off spots that were not as nice. Anything blocked off that used a smaller hose was just terminated with a bolt and a hose clamp, so I would want to make that nicer as well. 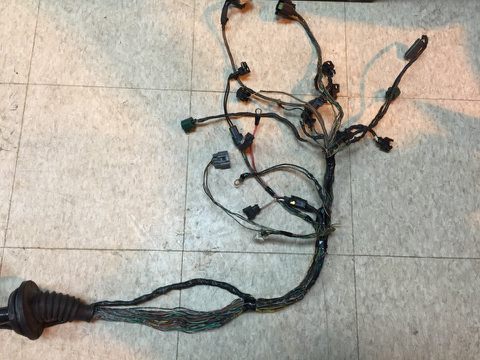 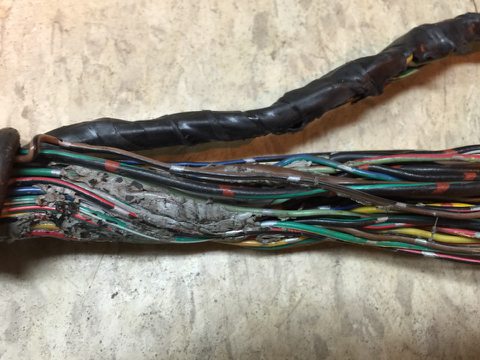 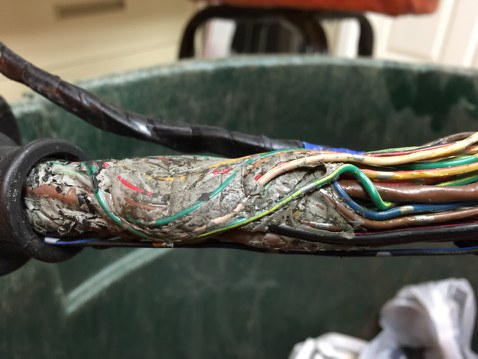 When the wiring harness came off the car there were some obvious problems near the area where the harness exited the engine bay of the car. Oil and dirt, along with the adhesive from the factory insulation had created a slimy mess covering the harness wires, and a few of the wires were broken. Hopefully fixing the problems with the harness would fix the gauges once the car was back together.

I would let the shop see to these things, so I could get the car back in running condition. Now that the car was apart with the engine out it was time to send it out for a rebuild.