One of my managers at work was kind enough to give me a 5 gallon glass carboy I could use for the brewing, which was perfect timing for having things finish up around the holidays. Since I've finally got my cider making process down so I'm not making poison, I figured I would make a big batch in the large fermenter and then do several flavors in smaller secondary fermenters. I only ever want to try and make a variety of ciders or beer, so having the new 5 gallon glass will definitely speed the process up for me. 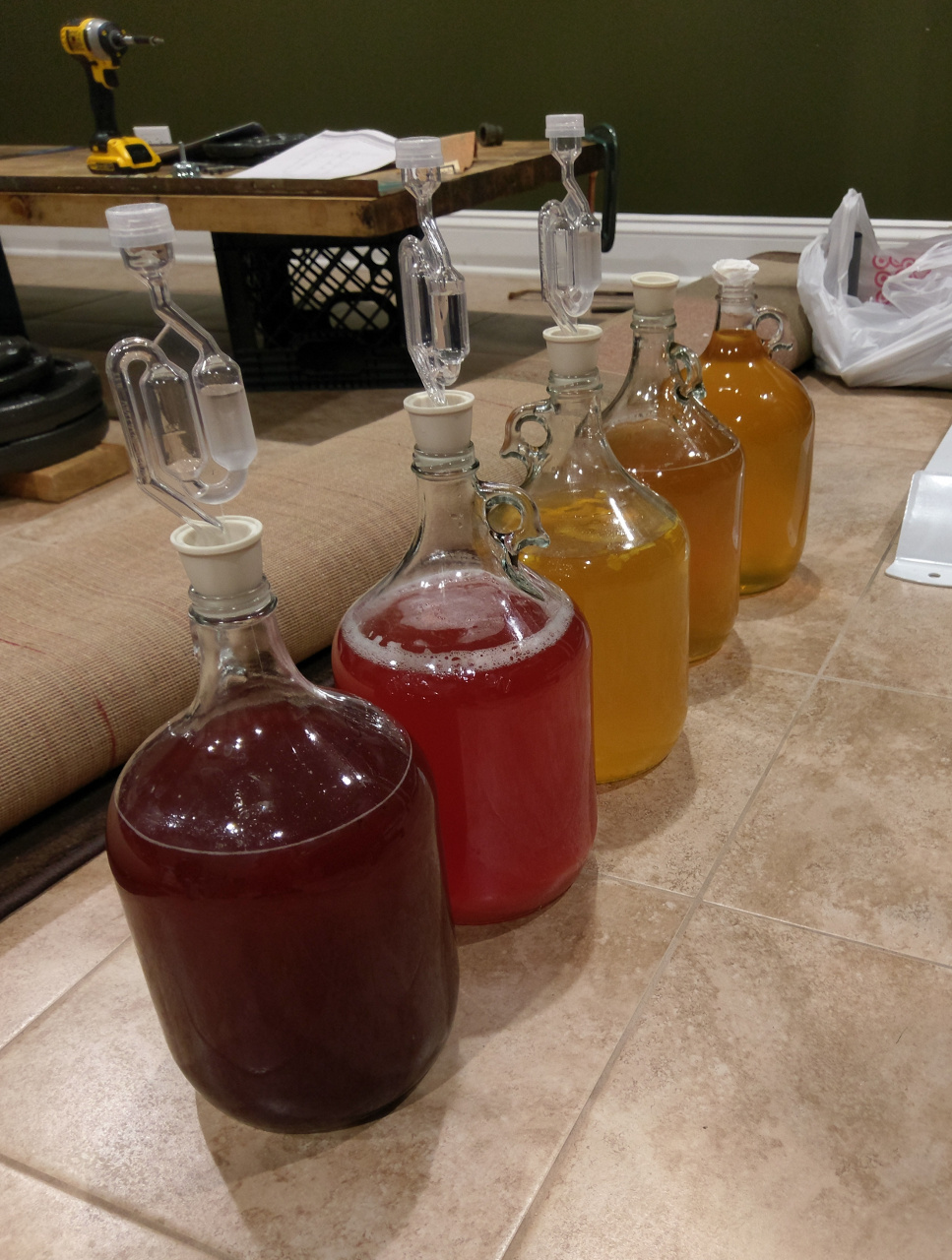 I started with 4.5 or so gallons of apple juice bought from the closest grocery store. In this case the juice used was a gallon of Mott's and about 3.5 gallons of Indian Summer Cider. Using a special selection of apples can really change the finished product but since a lot of the flavors in this would be arriving during secondary fermentation I just wanted a good base.

I let the juice ferment at 63-65 °F using US-04 yeast, which I've found to leave enough unfermented sugars where the body doesn't end up too thin. Primary didn't take much longer than a week before the gravity stopped dropping, but I ended up letting everything sit a little bit longer until I had the time to transfer to secondary. 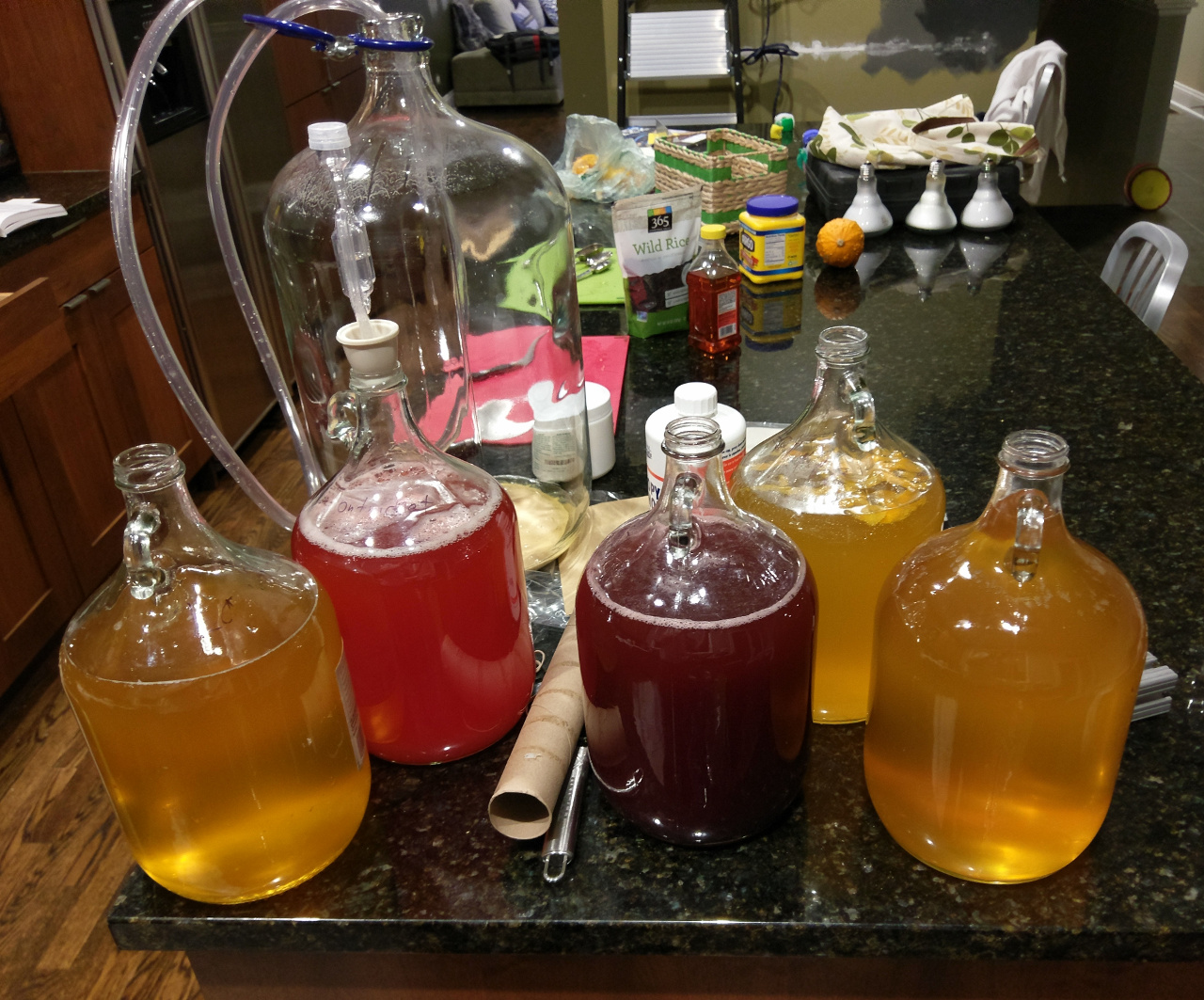 When I was ready to get everything into secondary I settled on 5 flavors to experiment with: 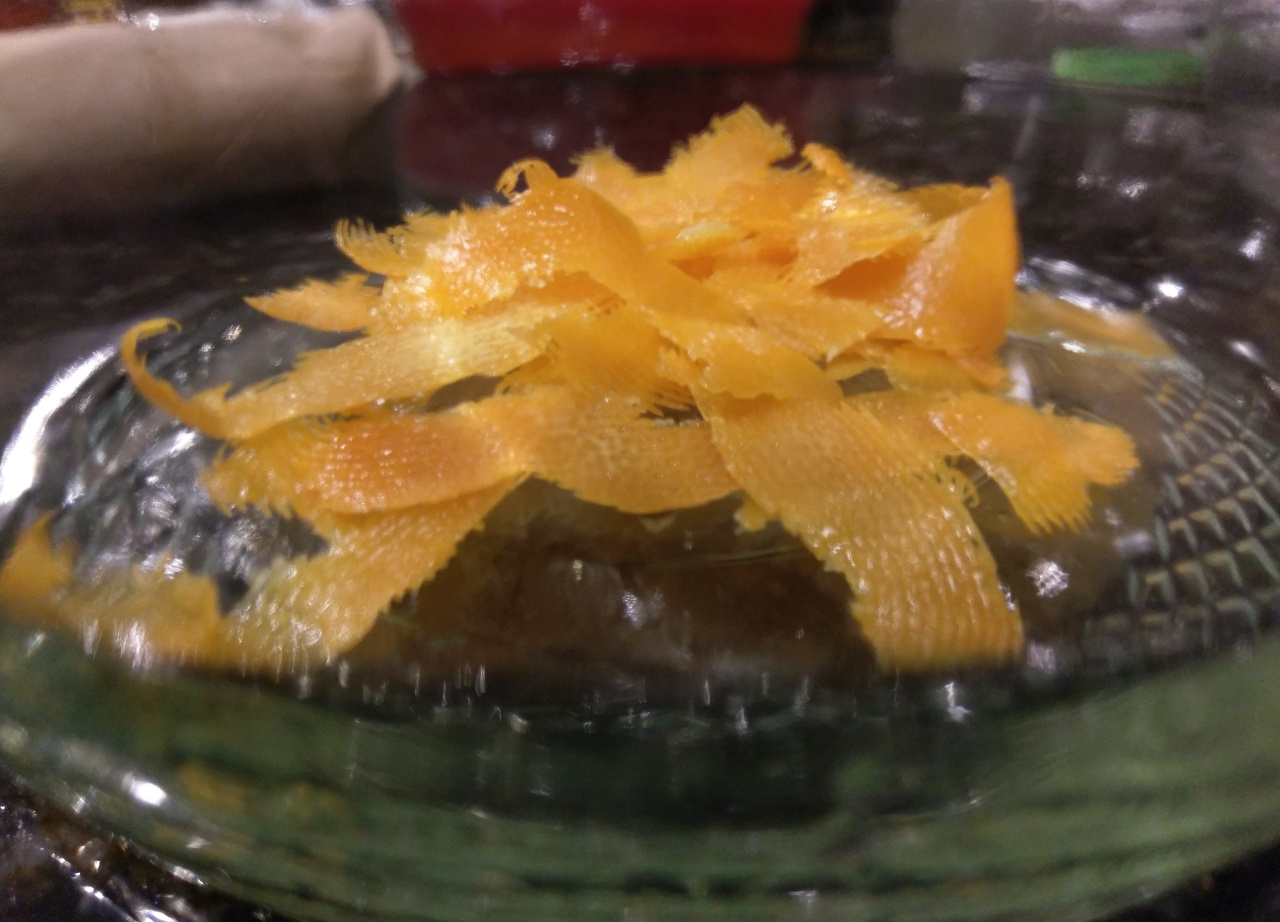 I'd done a blood orange cider before, but I hoped that this time the result would be better. I used only the juice from the orange previously which didn't really come through in the the end, and a very dry champagne yeast that resulted in a thin body. This time around I relied more on the zest from my orange than the juice to contribute flavor. 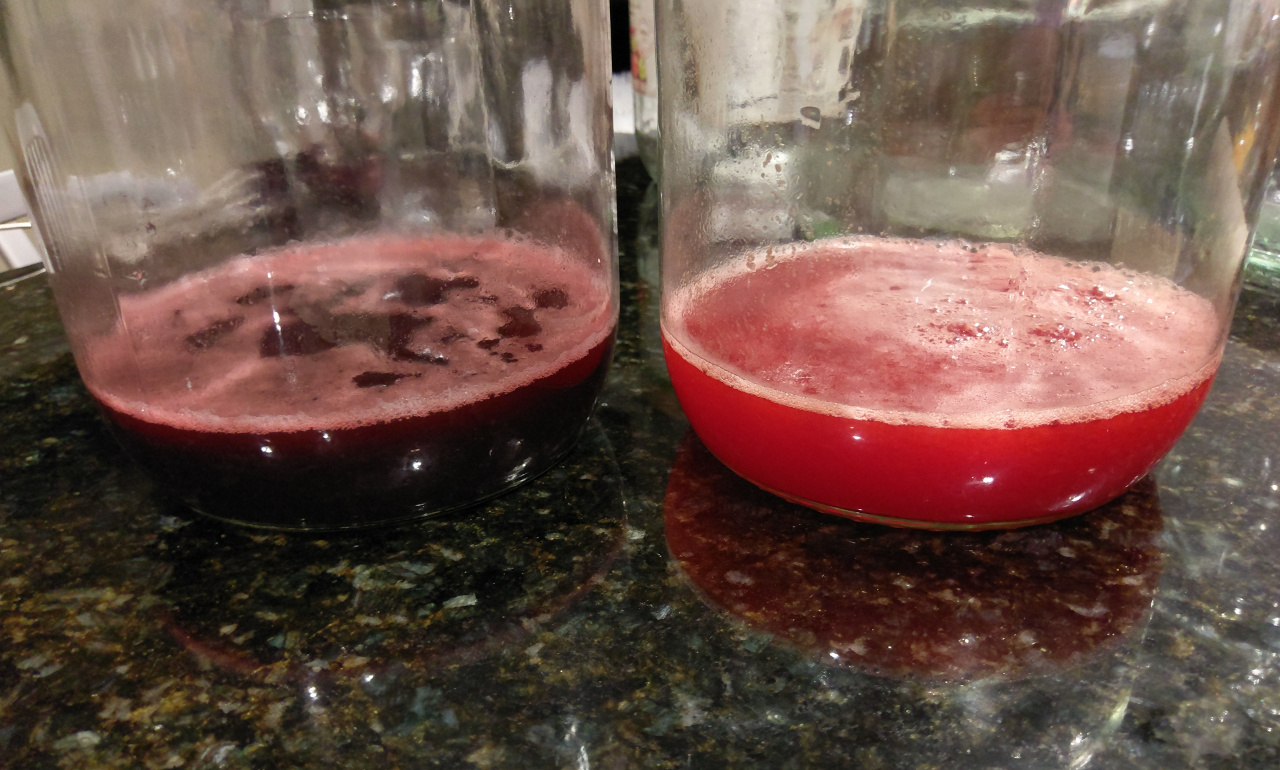 The blackberries and raspberries I juiced slowly by hand with cheesecloth. I used 24oz of each berry, which gave me a significant amount of juice and resulted in a great color. This also added some sugars and acids to the mix, which I hoped would give a nice tart feeling.

For the Galaxy hopped cider I used 6g of hop pellets in a spice bag, left in the cider for 17 hours or so before completing the dry-hop. I've had issues with a vegetable taste when I tried to get some hops in cider before, so I opted for the short amount of time in the fermenter to combat the issue. 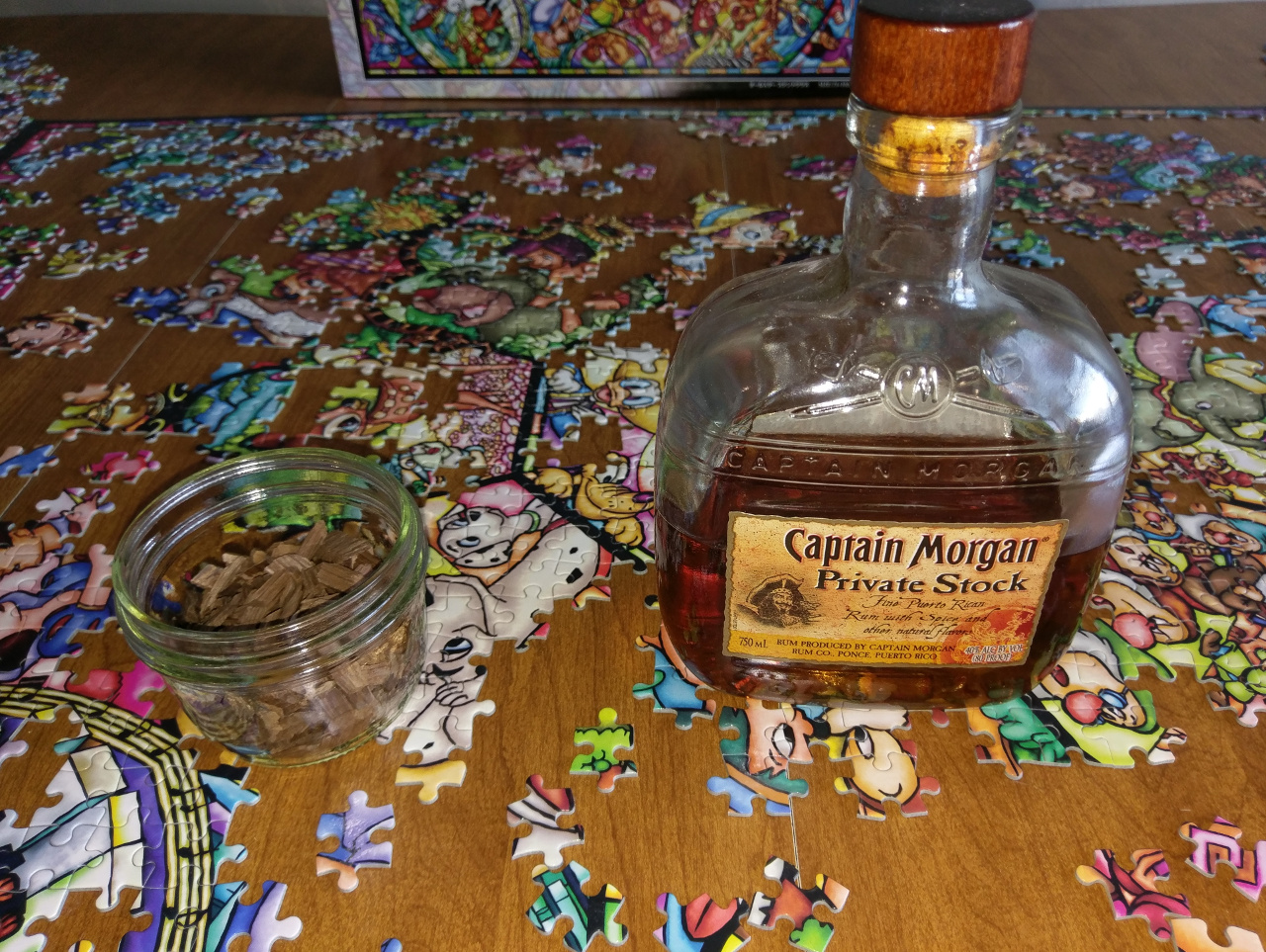 For the cider with rum soaked oak chips I used some Captain we've had for a while. In the past I have mixed this with some mulled pressed cider and it tasted pretty good, so I figured it would be a decent option. I used a full ounce of the medium toasted oak chips, which were also given to me by someone at work. In total I used 80 ml of rum and 1 oz oak chips. 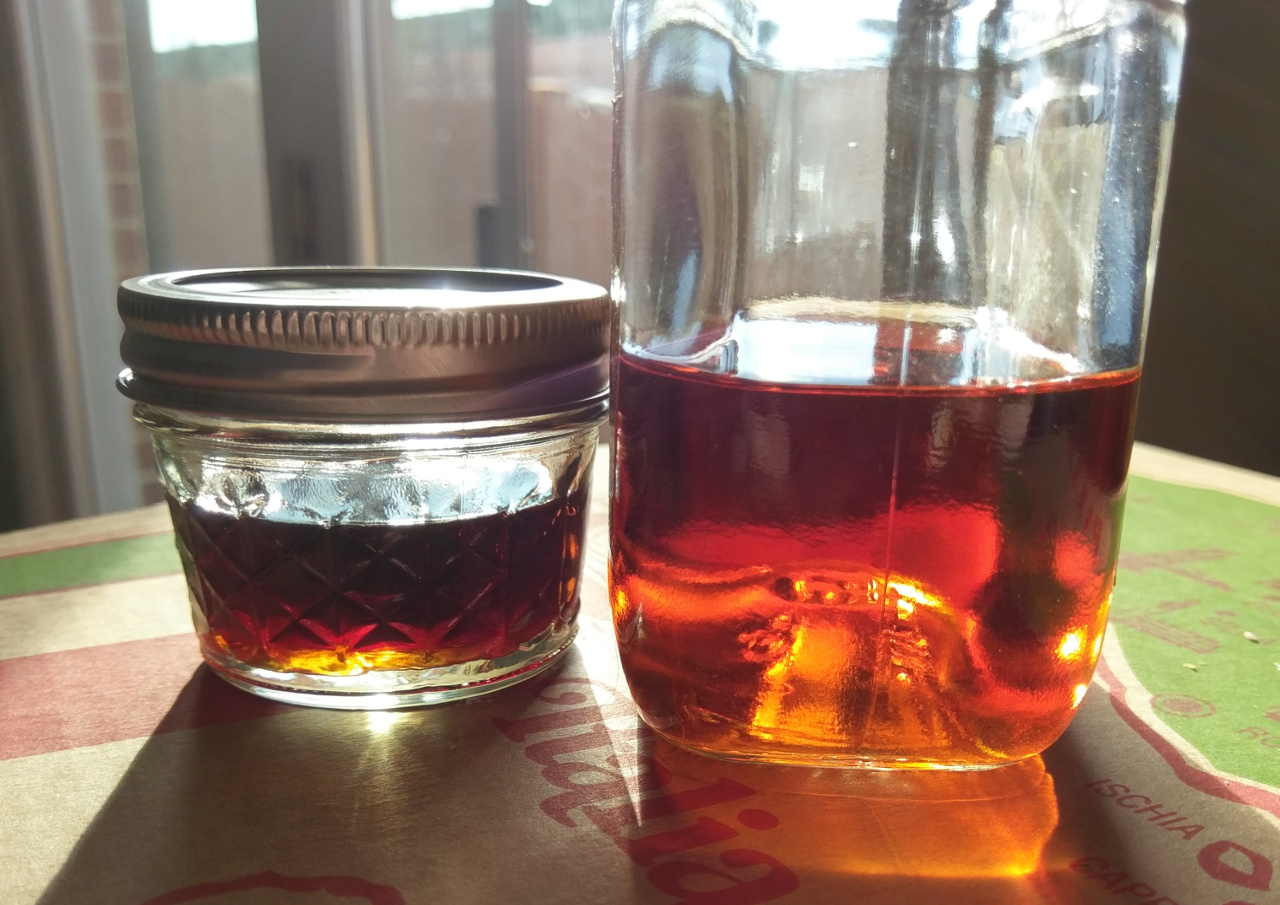 The oak chips absorbed quite a bit of the rum and swelled up as I left them to sit for a few days. The smell was so smoky when I opened the jar that I decided not in include the extra rum when I added the chips to the cider. The leftover rum was significantly darker than the original, and both smells and tastes strongly of oak and smoke. I can imagine flavoring other concoctions with this and it's fun to force onto friends, so I kept it.